Pastor Bev Sumrall of Cathedrel of Praise in the Philippines reports on the day to day impact of Sunday Line's assistance.

I want to express my thanks to the board and partners of Sunday Line for the continued love and support of our street children in Manila. Bernice and Velma visited us a number of times and loved these children. They participated in the feeding themselves, and had such a heart to support and feed these precious little ones. Honestly, when Velma went to heaven I thought that would be the end of an era. But then I found out that the partners of Sunday Line had hearts that just don't stop loving, just don't stop giving to the Lord and to these children.

Over the years we have certainly grown in our methods and effectiveness in feeding the kids. From almost random selection on the streets at night, we went to being in one location for a week. That worked so well we ended up going to one location for 3 months at a time. This allowed us to solidify the people in the area in their walk with the Lord and let them see a different path to walk in life.

So many people who are living in poverty at that level are also very fatalistic, thinking, "My mother was born here, I was born here, my child was born here, that's just the way life will always be." To get people looking upward to the Lord and understanding that He will be there for them, that takes time. So now, since the later part of 2015, we have been focused in one massive area of Manila called Happy Land. Believe me when I say there is nothing happy about Happy Land. It is a slang word from a Filipino word naming the area. Sewerage flows freely all over the ground we walk on. Those living in make-shift shanties are considered the blessed ones. Children live on the streets. When asked when their birthday is, they have no idea, no idea how old they are. They simply exist. And, existence in Happy Land is a rough and tumble, day-to-day struggle. Disease and malnutrition run rampant. Children who are blessed to go to school do not prosper there because they cannot focus on their lessons. Eventually, most drop out after one to three grades.

A few years ago when a super storm hit the center of the country, we made the most amazing discovery. One of the relief organizations we worked with (Feed the Hungry) was giving what they call 'manna packs'- a box of rice/soy based meals that simply could be cooked with water. One box had enough packs in it to last a family for 30 days. We were amazed by a totally unexpected side effect of this distribution. From members of our church who had relatives in the area, we started hearing about elderly people who had not walked in 6 months who were now up and walking around again, finding new found strength in their bodies.

We soon realized this was not a miracle but simply a result of nutrition. That sparked the idea of sourcing these 'manna packs' ourselves and targeting this massive poverty stricken area called Happy Land. If nutrition helped these elderly souls so much, how much more would it help give a child a chance in life; help them focus in school, let them at least grow up and make their own decisions about how to live life. So, for almost two years now, we have been feeding 2,200 children every morning with a hot nutritious meal, cooked on site, at the Gerard-Chapman Benevolence Kitchen, in Tondo Metro Manila. All meals are cooked and packaged there then taken to Happy Land and neighbouring Aroma for distribution.

The children are taught memory verse songs from the Bible and, if there are adults involved in their lives, they are taught the Word of God as well. We bought an old container van and turned it into a make-shift chapel on Sundays and a medical clinic on Saturdays. Members from our church operate this clinic and our young people preach the gospel every Sunday and hold children's church for the kids.

As a result, we have seen children now walking, talking, reading, studying and learning all because of daily nutrition. When we first went to the area we found kids who were hostile, sad, and with dark and dull eyes. Now these same kids come running every morning with joy on their faces and light in their eyes. The transformation is astounding. They are flourishing at school and passing their classes. They are getting to know Jesus and making Him their friend and help in life.

Parents are being saved and having their lives cleaned up as well. It is a long, slow process working with them because many of them are into drugs or have been imprisoned for serious crimes. We have held mass weddings for couples who wanted to be married (previously even if they wanted to they couldn't afford the government license and registration), held various medical and other workshops and clinics, started Bible studies, seen people water baptised - and now we are hearing testimonies of men able to find work on the docks or on a ship or in the market area.

The miracles continue- and it's all because people have cared enough to love them with meals. These meals come to them from our members EVERY day, seven days a week no matter what. In the midst of the worst storm the meals are there just as much as on a sunny day.

Of course there a many expenses involved in the program, but that is why we are so thankful for the love and support of Sunday Line. Because of you, we are able to do the things we do. We cook, we add the flavours the children find delicious and we distribute daily.

The members of our church love the feeding. Besides regular schedules of volunteers, it has become our church culture that, whenever someone has a birthday, they start the day at Happy Land with their family, cooking, and feeding the children. What a blessing.

Thank you, Sunday Line, for making miracles happen. We love you and appreciate you so much. What a difference you are making and may God continue to bless you. 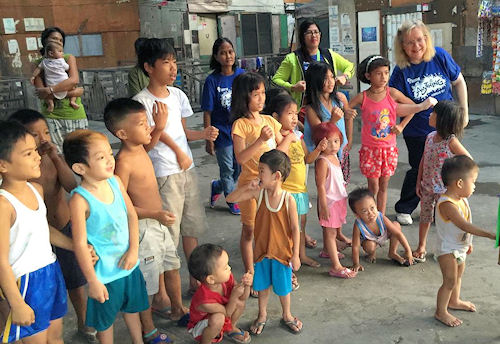 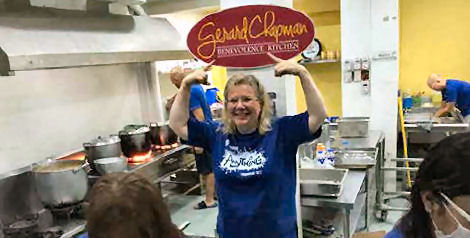 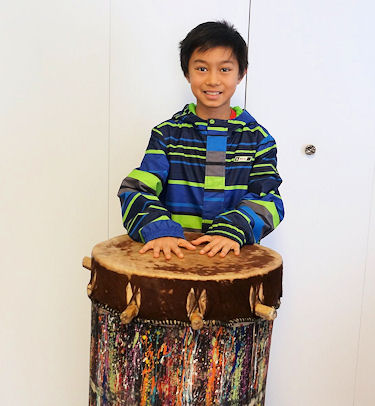 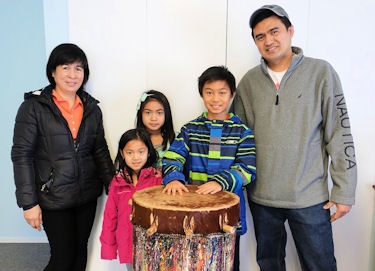 Mark with his Family

The winner of the Watoto drum this year was 10 year old Mark Lubog. Fortunately his family lives in Port Coquitlam and they were able to drive out to White Rock on Monday to pick up the drum as it was the father's day off and a pro-day for the children. The drum was heavy and awkward (as Helen will attest) and I knew it would be difficult to transport it to an out-of-area winner. Mark's parents come from the Philippines, though the 3 children have been born here in Canada. The lady in the photo is Mark's aunt as his mother was working and not able to come with them. Last year's drum winner also stopped by the booth for a chat. 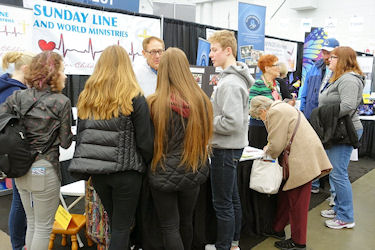 The winner of the Ugandan elephant is Cassidy Spyker of Abbotsford. I will meet her on Sunday afternoon and find out more about her story. Interestingly, my maiden name is Cassidy and so I was happy to announce her as the winner!

At least 158 people came through the booth, signed up for the drum or elephant and had interaction with Sunday Line. Of those, 54 asked to receive a monthly e-mail letter and 1 young lady would like to be added as a prayer partner for our monthly needs.

EXPRESSED THANKS AND APPRECIATION - JANUARY 2017 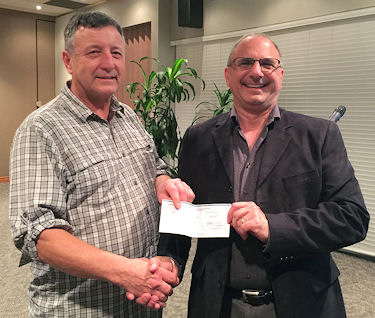 Thank you to all across Canada who faithfully support Sunday Line ministries! It is always rewarding to pass along the funds from you, our donors, to our mission partners.

Sunday Line director, Ron Marriott, was privileged to hand-deliver a cheque to Sergio Bersaglio, director of Villages of Hope Africa, during his Fall fund raiser.

Metro Kids is thankful for Sunday Line sponsorship that allows them to encourage and empower hundreds of at-risk children with hope to lead lives of significance.

Hannu Hauka, of Great Commission Media, expressed his thanks for the Sunday Line donation to the boys in the prison camp in the Volgograd region of South Russia. The funds were much appreciated and used to buy gifts of warm clothing, personal hygiene kits and food for 300 boys in the camp. 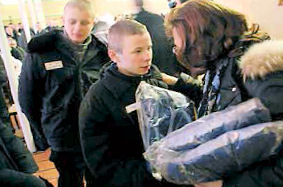 300 Boys in the prison camp in
the Volgograd region of South Russia recieve gifts of
warm clothing, personal hygiene kits and food.

The last weekend in May was special for Sunday Line Fellowship. The Omega students, from the 1 year mission course at Summit Pacific College in Abbotsford, BC, returned after their 3 weeks in Thailand and shared how they had been able to bring smiles to the faces of many children as they interacted with games and activities in the school classrooms. Following the service we gathered at Roman and Pat's home for a bounteous barbecue. The highlight was the water baptism of four, including the Zhao family who has recently come to Canada from China. 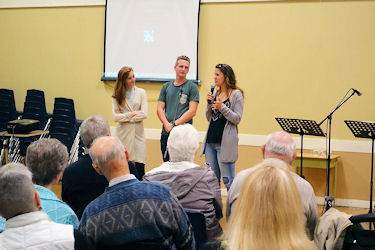 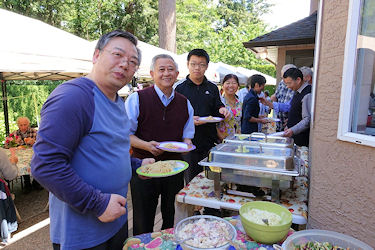 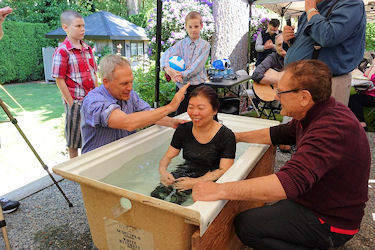 For the third summer, Linda Wing and her husband, Jamie, traveled to Uganda to serve with Watoto ministries - this time hosting their own team. They focused their time in the northern Gulu area at Living Hope, a Center established to restore purpose and dignity to marginalized and vulnerable women.

Jamie worked alongside some wonderful people as he gave many of the buildings a new look with a fresh coat of paint. Linda experienced the hard toil that goes into making one of the for-profit products sold when the Children's Choir goes on tour. She spent a day learning how to cut the material, operate one of the sewing machines and, tediously, stuff the toy cloth giraffes. She also participated in the "Keep a Girl in School" program by packaging up personal care products, loading them onto a bus and driving some distance away from the Living Hope Center to deliver them. This program is a wonderful blessing to the girls as it enables them to remain in school and thus have an opportunity for a more extensive future. The gratitude of the school and the young girls was overwhelming! 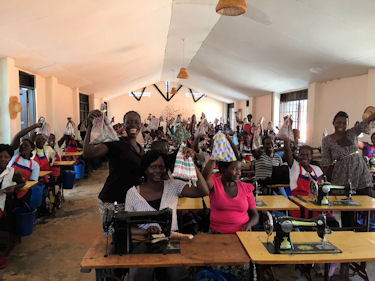 Keep a Girl in School 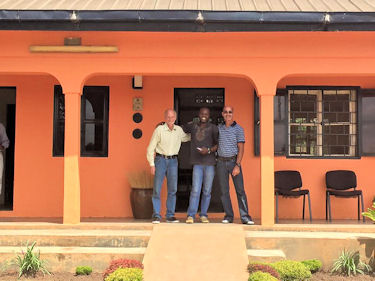 Helena has become even more popular since she won the Ugandan drum at the Sunday Line Missions Fest booth the last weekend of January! Friends are calling and asking if they can borrow the drum for special events for their ministry groups. Helena, a post-grad student and part-time grade 7 teacher, is passionate about missions and evangelism. She has been actively involved with a local bus ministry, with First Nations Ministries and with YWAM internationally in Bulgaria. It was a pleasure to gift her with this drum from the Watoto Children's choir. "This is a good motivation to take up music once again," enthused Helena.

More than 200 people entered the draw for the Watoto drum. It is encouraging to note that the directors and volunteers participating in the Sunday Line booth had the opportunity to speak with and invest in the lives of at least 200 people plus many others who stopped by the booth and did not sign up for the draw.

The theme for the weekend, "Mission: Being or Doing" was of significance for the thousands who attended the workshops and plenary sessions. 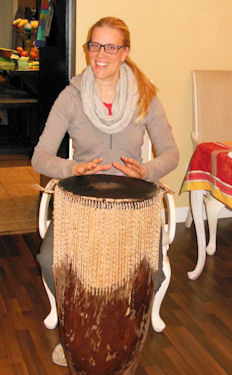 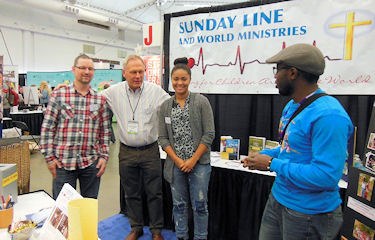 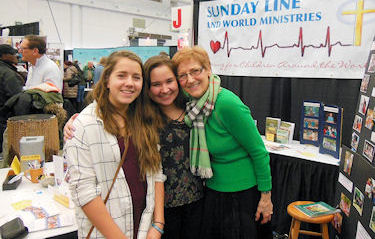 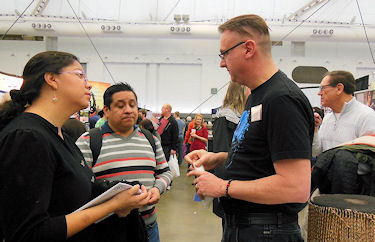 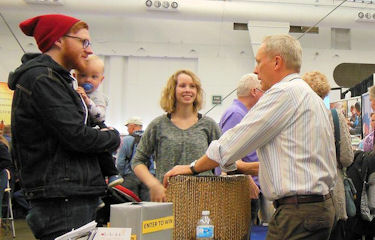